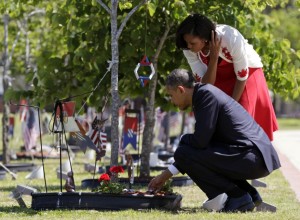 On September 14, 2009, President Obama spoke to the students at Wakefield High School in Arlington, Virginia, giving the school class president, Timothy Spicer, a challenge coin to commemorate the moment. An interviewer asked Timothy, who had the honor of introducing the president to the school, about the significance of the challenge coin given to him by the 44th U.S. president. Tim said, âI guess itâs a challenge to see how you wonât quit on your country, or a challenge to see you succeed in your country.â

The challenge coin continues to be a symbol of appreciation and honor. It has become customary of President Obama to hand out challenge coins to honor the service of military service men and women. The coins have also been distributed to commemorate special events like his visit to Wakefield High School. They have come to signify events of national importance and are tokens of appreciation awarded to outstanding individuals or groups.

In Honor of the Heroic Act of Specialist Ross McGinnis

Specialist Ross McGinnis lost his life while attempting to save four other individuals from a grenade blast inside a Humvee in Iraq. Specialist McGinnis made the ultimate sacrifice for his country, and like the many great heroes who have done the same, he was laid to rest at Arlington National Cemetery. The president visited the hallowed grounds of the cemetery on Memorial Day. During his visit, President Obama laid a challenge coin in front of the gravestone of Specialist McGinnis. The laying of the coin was a gesture of respect and gratitude from the Commander in Chief of the military for Specialist McGinnisâs outstanding valor.

The Tragedy of the Fort Hood Shootings

The tragedy of the Fort Hood Shootings is something U.S. civilians and military service men and women will never forget. On November 15, 2009 President Obama, accompanied by First Lady, Michelle Obama, placed challenge coins on each of the graves of the 13 victims killed at Ford Hood. This act was a symbol of the countryâs mourning for the deceased.

On May 6, 2011 at Fort Campbell in Kentucky, President Obama gave a challenge coin to Brigadier General Jeffrey Colt. Obama visited numerous military units returning from Afghanistan. One of the units he met with included the special elite forces team that was involved in the raid that killed Osama Bin Laden. It is assumed that numerous challenge coins were given to other military men and women in appreciation for their continued service to protect the U.S.

Military challenge coins have become a customary token of the President and the countryâs appreciation to military service men and women. Although, it is impossible to ever repay these military heroes for the sacrifices they have made to keep our country safe, we try to find a way to capture the respect and appreciation we have for them.

These coins are not just available to the President of The United States. Other respected organizations including police and fire departments distribute these coins to honor heroic acts, celebrate special occasions, and build camaraderie. If you are interested in placing an order for custom challenge coins for your organization, you can call 1-800-818-3229 or fill out an online free quote submission, and the representatives at Challenge Coins Limited will assist you with your request.